The History and Heritage of Irish Family Names

Most Common Irish Last Names and What They Mean 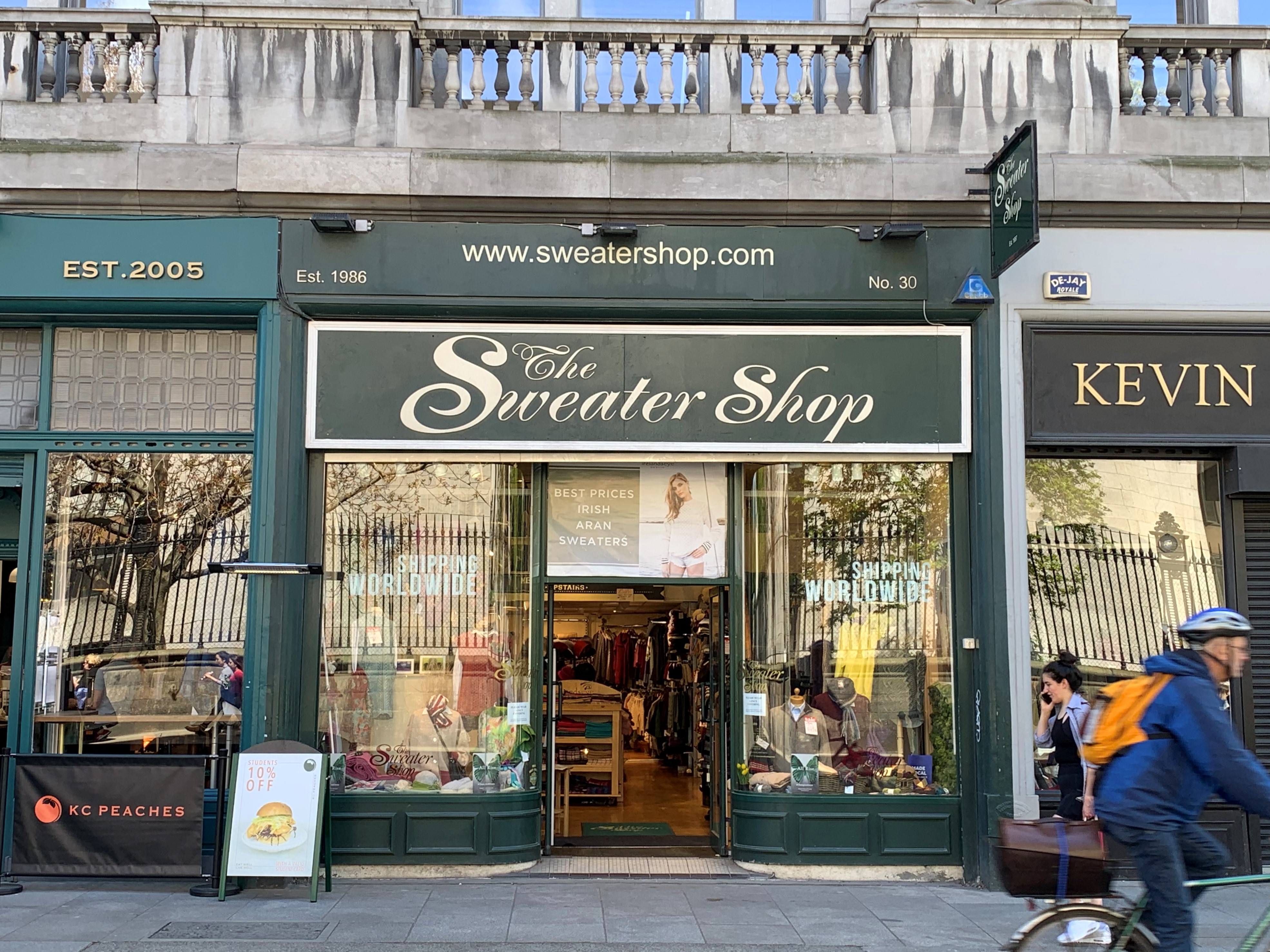 Most folks within the global Irish diaspora with an Irish surname are, by now, well used to answering questions about their origin and fending off jokes and curiosity of all manner and shape.

While hearing about the antics of ‘Paddy’ and ‘Murphy’ can be somewhat tedious for many, we recommend countering with a deadpan witticism of your own, like "what is the most stereotypical Irish name?" – Klee Shea!

Despite the jokes, Irish descendants have every right to be proud of their heritage, and many people find themselves wanting to know more information about their origins.

In fact, genealogy tours of the Emerald Isle are consistently requested by the Doyles, Kelly’s, O'Malley's, and other notably Irish families scattered throughout the world. People are looking for the opportunity to see shops with their clan names and bump into long-lost cousins in the local pub.

The pandemic has forged a newfound desire for discovering our origins, with the monotony providing an ideal opportunity to do some cyber-sleuthing.

Surprisingly, the frequency of many Irish names is not the most challenging factor when chasing an Irish family tree. Research on Irish genealogy often hits brick walls due to a simple lack of records.

In a country where famine, natural disasters, wars, and religious conflicts have been ongoing, even the meticulous transcriptions by Catholic monks and nuns wasn't always enough.

So, how exactly does one get started on the path to finding their Irish roots? Despite the fact that Ireland was slow on the uptake to providing online records, the country is now considered a world genealogy leader. DNA testing is another way that the advent of science has circumnavigated the barrier to discovering one's family history.

Roughly 77,000 Irish people claim Murphy as their surname, and nearly 385,000 Americans also call themselves Murphy. It's a safe assumption that almost everyone knows a Murphy somewhere on the planet; with one out of 647 people in Australia claiming the surname and one out of 782 in England, you won't have to look far.

However, it's on home soil in Ireland where you would be hard-pressed to avoid a Murphy, as one out of every 61 people in the country has the name. Luckily, phone books are a thing of the past, since there were over 52,500 Murphys listed in the Irish telephone directory in 1990. Good luck finding your long-lost friend!

The exact origin of the surname Kelly is uncertain, but there is no doubt about its Gaelic origins.

Kelly is the second most popular surname in Ireland. However, there are actually more Kellys in the UK and in the USA than in native Ireland due to centuries of emigration.

There are separate Kelly clans or septs located throughout Ireland in Wicklow, Antrim, South Roscommon, Meath, Sligo, Derry, and Laois. The origin of the name Kelly is O’Ceallaigh which means descended from Ceallach, an ancient Irish chieftain.

In 1351, the chief of the O’Kellys invited all of the poets and musicians within his command to spend Christmas day with him, inspiring the phrase “O’Kellys welcome”.

In Ireland, O’Sullivan is the third most popular surname. It is also the most common surname to have reinstated the Gaelic ‘O’ prefix.

The O’Sullivan clan are descendants of Olioll Olum, who was the King of Munster in the 3rd century. In fact, as late as 1890, 90% of the world’s O’Sullivans were estimated to be found in Munster.

In the 1100s AD, the O’Sileabhins were Lords in Cahir, Country Tipperary, but later split into two sects and spread further. In 1602, Donal O’Sullivan Beare joined the O’Neills and together led a rebellion against Queen Elizabeth I. Despite the extreme loss of life due to battle and starvation, O’Sullivan is still considered an Irish hero.

O’Connor and its variations, including O’Conner, Conner, Connor, and Conor, are the ninth most common Irish surname.

Varying O’Connor sects can be traced back to every county in Ireland, with the last two High Kings were Roderick O’Connor and Turlough O’Connor.

Legend has it that the Leinster O’Connors are descendants of the mythical Fionn Mac Cumhail, also known as Finn MacCool, who was the leader of Fianna. These Irish warriors defended their land for centuries.

O’Connor Family Motto: From God comes every help and I neither fear nor desire

More than 30,000 people in Ireland claim Ryan as their surname. While the origins of the name Ryan are not entirely clear, many of the Ryans from western Ireland can trace their ancestry back to a 9th century chieftain called Maelruain.

Meanwhile, Ryans from eastern Ireland are most likely descended from a 10th century King Rian who ruled over a large region in what is now South Leinster.

Numerous Ryans fought in the American Revolution, with 322 recorded in their ranks, the most famous of which was Abram Ryan, an American Priest, and Poet who helped soldiers with smallpox when most others refused. Today, most Ryans can track their family history to the Munster clans found in Limerick and Tipperary.

Ryan Family Motto: I would rather die than be disgraced

McCarthy is the most common last name in Ireland to have the “Mc” prefix and is the 13th most common overall.

The McCarthys have a long history in Ireland, and it is believed that they could be linked to King Milesius, also known as the ‘Soldier of Spain’.

Despite the name being derived from Carty, an old word for loving, the McCarthys were well known for neighborly disputes over territory.

Blarney Castle, the home of the infamous Blarney Stone, was built in Munster by Cormac MacCarthy in the mid 15th century.

It was Cormac where the fable of the Blarney Stone originates. Legend has it that the Goddess Cliodhna told Cormac to kiss the stone. Later, he delivered a convincing speech in court as he was given the ‘gift of the gab’.

Today, nearly 60% of the McCarthy’s living in Ireland can be found in County Cork.

McCarthy Name Meaning: Son (or daughter) of the Loving Person

McCarthy Family Motto: Strong, courageous and swift, and nothing is difficult to the brave and faithful

Last, but by no means least on this list of legendary Irish surnames, as the proud proprietors of this great Irish Sweater institution, we often get asked about the Byrne family name!

Byrne is the seventh most common Irish last name, and includes variations such as O’Byrne and Byrnes. O’Byrne means descended from Branach, who was the son of the King of Leinster in the 11th century.

The Byrnes once ruled present-day County Kildare but fled east during the Norman invasion to County Wicklow. It was here that they joined forces with the O’Tooles to protect Wicklow against English and Norman invasions for many centuries.

In fact, the Irish folk song ‘Follow Me Up to Carlow’ is based on Fiach McHugh O’Byrne, who defended Wicklow against the English.

Today, most with the surname Byrne, O’Byrne, or Byrnes originated in either Kildare, Wicklow, Dublin, or Kilkenny and can claim a long history of being Irish freedom fighters. There were even 187 recorded Byrnes that fought for the American side in their War of Independence.

Byrne Family Motto: I have fought and conquered

Irish Names from the Past to the Present

So there you have it, a whistle-stop tour of some of Ireland’s most fabled surnames, what they mean and why they’re so prevalent in the global diaspora to this day.

Don’t see your family name listed or want some more info on the background of another Irish family name not covered? Please give us a shout and we’d be delighted to answer your questions or get your name listed above!

Whereas at one time, people would scour through manual birth, wedding, and death registries and spend countless hours scrolling through library records, most of today’s work and research can be done from the comfort of your own home.

Websites such as the Irish Genealogy Ancestry can help get you on your way to finding more about your family name and history. You might even find a township in Ireland brimming with long-lost cousins.

Other great websites such as A Letter from Ireland offer inspiration to dive into Irish culture and tips to get you on your way to climbing your own family tree. We’re confident that many of our readers will be busy knitting (or just buying!) traditional Irish sweaters and planning trips to Ireland very soon!